Despite a gloomy weather forecast and the threat of heavy showers, at 5pm on Friday the 29th May 2015, Skelmanthorpe Prospect Brass boarded the coach which took them ‘over t’ tops’ to Saddleworth and Tameside for the 2015 Whit Friday March Contests.

For those who have never enjoyed the Whit Friday experience, most contests get under way at 4pm
and on arrival at a contest village, bands are registered and allocated an order of play number. When its number is called, a band forms up, marches and plays to the contest arena. At this stage the band is being judged on deportment. At the contest arena, the band plays a published (quick) march of their own choosing. Here the band is adjudicated on its musical prowess. Having finished playing its contest march, the band then moves on to another village where the whole process is repeated. This year, Prospect Brass took part in contests at Carrbrook, Stalybridge, Broadoak, Ashton, Lydgate and Scouthead.

The results of the contests are announced by the adjudicators at the end of the evening and posted on various websites the following day. Prize winning bands are also notified officially by post. In the 2nd section, Skelmanthorpe Prospect Brass achieved victory at Stalybridge and Broadoak, second place at Lydgate and third place at Scouthead. A video of the band’s performance at Lydgate of John R. Carr’s, ‘Bramwyn’ can be seen via our YouTube channel. 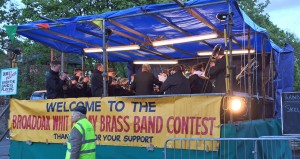 A huge thank you must go to John Roberts who stepped in at the last minute and took over the reins while the band’s regular MD, Phil Garlick is in hospital awaiting surgery. Our very best wishes go to Phil for a speedy recovery.

Thanks also go Chris Bentley, Laura Brown and Gill Iredale for their contribution during
rehearsals and on the evening, to the band’s runner Michael Rock and to everyone who supported
the band.

Posted on May 29, 2015 by Skelmanthorpe Band
This entry was posted in News-All, Skelmanthorpe Propect Brass. Bookmark the permalink.